During the duration of my open source releases, I found myself going back to Flashpoint and curating for fun.

Freearcade (as I mentioned in my previous post) is a site that mainly has Java applet games and those games tend to have a lot of assets.

Deciding to curate another Java applet game, I realized that it wasn’t only Wiz3 with a bunch of assets but this game as well.

Flashpoint comes with autocurator scripts (which I didn’t know at the time)but I decided to make my own using Windows PowerShell. I’ve been wanting to learn Powershell scripting after enjoying bash, and decided that as a struggling Windows developer, I should get to know the tools on this platform. So this dilemma was a good excuse.

So this is my first PowerShell script. 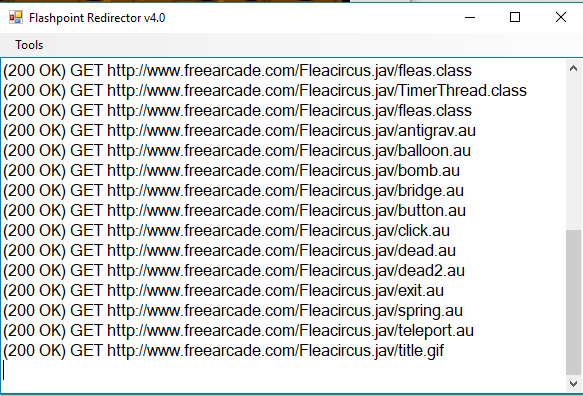 You can copy all 404 URLs by hitting Tools -> Copy All 404 Not Found URLs. It’s tedious to go to each URL and download files one by one.

Make a PowerShell Script to automate it.

Rest of the code with some TODOs.

This script I passed on to the Discord and was happy to see that some people had cloned it on Github (through the analytics). It’s optimized for Freearcade.com java applets but I hope to expand it to become better.